Poking the Russian Bear at last has had a response. They have woken it up big time! All the promises of NATO saying it would never expand eastwards – (an organisation which after the fall of Communism was defunct anyway) – were broken, the Minsk agreement signed by Merkal and the Ukranian Government was broken by those signaturies. They promised to look after the Russian speaking Eastern Ukranians but the Ukrainian government allowed a war to be perpetrated against them with the loss of life of approx 14000 people. All the rejection of excellent athletes and sporting talent from Russia, banned from Olympic Games on trumped up political charges of drug abuse (as if that were not a global sport problem). And then the propaganda in the UK telling football supporters that going to the Russian World Cup would be dangerous – yet those that went loved it and later expressed that such advice proved to be nonsense. And what sort of government makes a speaking language a crime. The government made speaking Russian in Ukraine illegal. You can't get more racist than that.

And which nation created the first Covid vaccine in the world? Russia. Sputnik V. And did the EU and WHO give them medical and trade authorisation and make purchases? Ha. Somehow the tacit agreement within all Western Nations at that time was that Russia is a pariah and must be kept a pariah. Disgusting when you think of the great sensibilities and genius of Russian art, literature science and philosophy. (And everything else). The Russians are not a superficial nation.

So at last – after all this provocation – the bear has woken up and is angry! But it is not starting a war. It is moving into a war that has been going on for eight years to defend its people. It is going in to protect its Russian speaking brothers and sisters in Eastern Ukraine who have been at war with Western Ukraine since 2014, despite agreements for peace which Western Ukrain signed and then blatantly ignored.

Over that time Russia tried for diplomacy, it was rejected. It tried for moderation. It was ignored. Resentment over decades eventually explodes. What the West has unleashed and how it may repond may be the end of the human race. Let's hope there are some sane Western rulers out there somewhere. If the USA did not want Russian nuclear missiles in the neighbourhood of Cuba, why would the Russian Bear want US nuclear weapons in Ukraine? Not rocket science is it? – but rocket science it is now because NATO must have a cause to exist – to keep paying all those enormous salaries and expenses. And to be the compulsory showroom of the military Industrial complex, the most dangerous thing in the world.

The West want this proxy war to go and on – to keep on sending Ukraine more and more armaments to make the US military industrial complex reap in tax payers money, money that is being given to Ukraine. And to undermine Russia economically and bog them down militarily – leaving the Middle East open for exploitation. If Western citizens really knew the truth about this long term plan of the Pentagon they would be truly horrified. But –  because of the totally one sided, totalitarian propaganda push (the biggest since the Great War) Western citizens are being turned into 'useful idiots', we all suffer at the hands of the politically dumb. 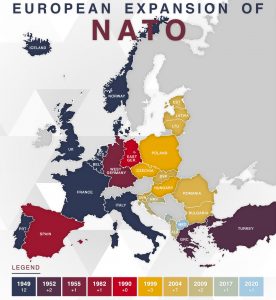