The Secretive Group Guiding the U.K. on Coronavirus

The British government frequently says it’s “guided by the science'.

LONDON — As the British government comes under mounting criticism for its response to the coronavirus — one that has left Britain vying with Italy and Spain as the worst hit countries in Europe — Prime Minister Boris Johnson and his aides have defended themselves by saying they are “guided by the science.” 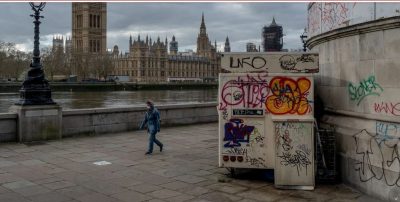 The trouble is, nobody knows what the science is.

The government’s influential Scientific Advisory Group for Emergencies — known by its soothing acronym, SAGE — operates as a virtual black box. Its list of members is secret, its meetings are closed, its recommendations are private and the minutes of its deliberations are published much later, if at all.

Yet officials invoke SAGE’s name endlessly without ever explaining how it comes up with its advice — or even who these scientists are.

That lack of transparency has become a point of contention, as officials struggle to explain why they waited until late March to shift from a laissez-faire approach to the virus to the stricter measures adopted by other European countries. Critics say the delay may have worsened a death toll now surging past 20,000, and they fault the government for leaving people in the dark about why it first chose this riskier path.

With all the secrecy, even some of Britain’s top scientists say they don’t know whether they can trust the government’s approach.

“Is the science being followed by the government on coronavirus?” said David King, a former chief scientific adviser to the government. “I don’t know, because I don’t know what the advice is, and there isn’t the freedom for the scientists to tell the public what their advice is.”

Professor King, who counseled Prime Minister Tony Blair on the foot-and-mouth disease that infected British farm animals in 2001, said there was no justification for the government to withhold either the advisory group’s membership or the minutes of its meetings. Doing so, he said, eroded public trust in the government, especially given the bewildering twist and turns in its response.

It also raises questions about an academic group that ought to be a point of pride for Britain: the country’s best scientific minds, in fields from epidemiology to behavioral science, assembled from cutting-edge labs at Cambridge, Oxford, Imperial College and the London School of Hygiene and Tropical Medicine.

“The names are likely to come out at some stage,” said David Lidington, who served as a deputy to Mr. Johnson’s predecessor, Theresa May. He warned that the government’s lack of disclosure would only cause more headaches later. “There is the risk that if names leak out after a time it becomes a great shock-horror,” he said, adding that it would be better to make a virtue of transparency

Even now, outside scientists and doctors are second-guessing the advice of these unnamed authorities.

Why, for example, did SAGE recommend less stringent social-distancing measures on March 9, when France and Ireland were banning large events and ordering lockdowns, and there was ample evidence from Italy of the epidemic’s rapid and lethal spread? (The unusual disclosure came in a report the government posted about the predicted effects of various social-distancing measures.)

Why in late February did a subgroup of SAGE experts underestimate the percentage of people who would have to be hospitalized as a result of contracting the virus, and why did their models underestimate the speed at which the pathogen spread?

Why did those scientists agree to classify the risk level of the contagion to the public as “moderate,” even after weeks of evidence that it was being transmitted between humans in China?

Why, after Imperial College London published a frightening study on March 16 that projected up to 500,000 deaths if Britain did not act more aggressively to curb the virus, did Mr. Johnson wait another full week to close nonessential shops and order people to stay in their homes?

“Political decisions are often framed as following the best scientific advice,” said Connor Rochford, a physician and former consultant at McKinsey & Company. “But science is nothing more than a normative claim about how we ought to make a decision. These are best-guess estimates.”

Some said the frequent references of Mr. Johnson and his aides to the scientists should be a warning sign. If, as is likely, the government’s handling of the crisis is scrutinized in a future parliamentary inquiry, officials are likely to justify their actions by saying they were listening to the experts.

“It has become a shield for them,” said Devi Sridhar, director of the global health governance program at Edinburgh University. “If things go off, you can always say, ‘Well, it was the experts who told us.’”

The government has deflected pressure to identify the group’s members or how many there are by noting that Patrick Vallance, the current chief scientific adviser, who chairs the group, regularly appears in public at news conferences. The government also posts brief reports from some of SAGE’s subgroups, and the data that go into its models, on the internet.

In a recent letter to Parliament, Professor Vallance said anonymity protected the security of scientists and also shielded them “from lobbying and other forms of unwanted influence which may hinder their ability to give impartial advice.” He added that people were free to disclose their membership.

One member who has — Jeremy Farrar, an infectious disease specialist who is the director of Wellcome Trust — acknowledged the limitations of the system when he recently told the BBC that the New and Emerging Respiratory Virus Threats Advisory Group, which advises SAGE, underestimated the threat of the contagion in March.

“The U.K.,” Dr. Farrar added, “is likely to be certainly one of the worst, if not the worst, affected countries in Europe.”

Another member who has become a household name, and a source of scrutiny for his eye-watering statements, is Neil Ferguson, an epidemiologist at Imperial College London. His team of modelers produced the March 16 report that prompted Downing Street to impose a lockdown (it was also influential at the White House, which embraced social distancing).

Professor Ferguson, who collaborates with the World Health Organization and has advised other countries on how to deal with epidemics, later came down with symptoms of the virus himself. In late March, testifying before Parliament from self-isolation in his house, he generated more headlines when he said that Britain could keep its death toll under 20,000 if it stuck with strict social distancing.

Professor Ferguson did not reply to requests to discuss his advice to the government or the deliberations of SAGE.

But in an interview with The New York Times the day the March 16 report was published, he laid out the choice Britain faced: Manage the spread of the virus in a way that minimized deaths but allowed a significant percentage of the population to become infected — a situation known as “herd immunity.” Or tamp down transmission of the virus by imposing a lockdown of the kind the Chinese government did in Wuhan. In the end, he said, there was no choice but to take the latter course.

“The U.K. has struggled in the past few weeks in thinking about how to handle this outbreak long term,” Professor Ferguson said. “We don’t have a clear exit strategy, but we’re going to have to suppress this virus, frankly indefinitely, until we have a vaccine. It’s a difficult position for the world to be in.”

Until mid-March, Professor Ferguson, Professor Vallance and other scientists had appeared receptive to the case for “herd immunity.” Then, confronted with new numbers that projected hospitals would be overwhelmed with patients and that the death toll would skyrocket, they pivoted to a suppression strategy.

What is unclear is the role SAGE played in shifting the government’s thinking.

One of the few public documents that gives a glimpse into its deliberations — a March 9 report assessing the potential impact of social distancing measures — said the group recommended “a combination of individual home isolation of symptomatic cases, household isolation and social distancing of the over 70s.”

That is far short of the lockdown measures Britain ultimately adopted. It did not, for example, include a ban on large gatherings, like concerts and sporting events, in part because behavioral scientists doubted there would be enough compliance with the bans to reduce the spread of the virus.

Nor did it include a recommendation for widespread testing and contact tracing of people who had contracted the virus — a policy the government had pursued with some success during the earliest days of the outbreak in Britain.

“I’m guessing there was a debate between containment and mitigation, and they decided to go with Option B,” Professor Sridhar said. But she added there was no way to be sure until the deliberations were made public.

Among the other mysteries of SAGE is the makeup of the group. Professor Vallance said it includes representatives from more than 20 institutions, with expertise ranging from molecular evolution to microbiology. There are four expert groups, with anywhere from five to 45 members, whose advice is funneled into SAGE. Some scientists, like Professor Ferguson, serve on multiple panels.

But outside experts questioned whether it has enough representation from fields like public health and logistics. Britain’s lack of masks, gloves and other protective gear has become another weak link in its response.

Some experts also said the scientists suffered from a lack of independence. While Professor Vallance has begun to show some daylight with the government — he recently said SAGE would re-examine the government’s decision not to advise people to wear masks — his regular public appearances next to Mr. Johnson and other cabinet ministers have made him look too much like an agent of the government rather than an independent adviser, according to critics.

On Thursday, the government said it would consider the latest scientific advice on masks and it seemed likely to encourage their use — a decision complicated by the shortage of masks for people who work in hospitals and nursing homes.

Some of SAGE’s internal debates play out in competing research studies published by their authors. A few days after Imperial College released its dire projections about the deadliness of the virus, a team at Oxford University published a study that considered a scenario in which more than half of the population might already have been infected — a theory that, if valid, would argue for a less draconian response.

Scientists, of course, often disagree and change their minds, based on new data. To some, that is yet another argument for lifting the veil on the advisory group.

“The idea that a small group of experts can never make a mistake or miss out on any information is never right,” said Sarah Wollaston, a former chairwoman of the House of Commons Health Select Committee. “But you can’t challenge the advice if other experts can’t see what they are looking at.”

Culture, style and the arts